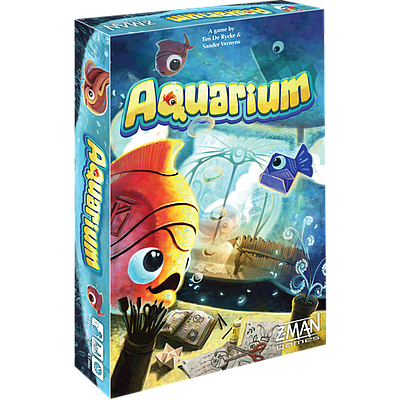 Aquarium is an underwater city represented on the board by twelve colonies divided into three levels deep. The game action takes place at the end of the XXI century. The match lasts three steps with five rounds in each step. The main goal of each player is to build various elements within the city to score more points.

In his turn a player can move your submarine spending uranium units and after it must intercept a character and do an action. There are five characters in the game: Commander - allows supply the submarine with new crew and also allows the entry of inhabitants in the city. Engineer - builds elements within the colonies. Scientist Alien - provides technology cards. Controller - supplies submarines and the colonies with oxygen. Investor - provides money to players.

In addition, Aquarium has two mini expansions included in the base game: 1 - Special Card characters. 2 - Saboteur, which allows players to hinder the plans of his opponents interrupting the flow of oxygen in certain colonies of the board and causing unexpected penalties!