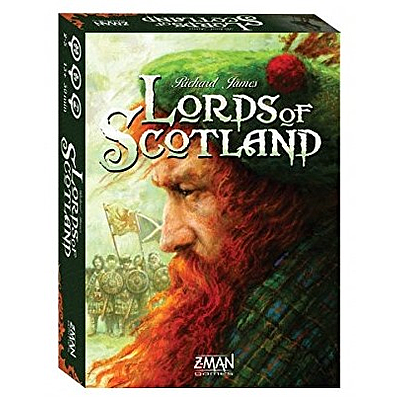 The throne lies empty and the clans are restless. As a lord of Scotland with land, men and money at your disposal, now is the time to lay your claim. But you are not alone. Your rivals have been waiting for just such an opportunity themselves and they are poised to act. With the clans of Scotland ready to follow the strongest leader, it is up to you to win the loyalty of the clans first. If you can demonstrate your prowess in battle to enough clans, then the rest will fall in line behind you. Do you have the audacity and cunning it takes to be crowned king?

How to Play
You acquire the support you need to win the game by winning skirmishes against your rivals. A skirmish is five consecutive rounds of play. During each round of a skirmish, you have the opportunity to either build up your army by playing cards from your hand or recruit clans to fight for you by drawing cards from the recruit pile. At the end of the five rounds, each lord gets to claim a supporter in order of highest strength army to lowest. Then you discard all the clans you mustered and begin a new skirmish. The game ends when one lord reaches forty or more points worth of supporters and claims the throne. If you hope to be the one to do so, you will need to know when to commit your forces to battle and when to regroup to fight another day.